"Cat renal failure is a complicated and life threatening condition. It is specifically called “Chronic Renal Failure (CRF)”, which refers to a chronic condition. Feline CRF most commonly develops in older cats or in those which have ingested a large quantity of toxic material. In general, this condition refers to the failure of kidney functions. The cause of feline renal failure cannot be specified. It may occur for various reasons including cat urinary tract infections, urolithiasis (Kidney stones), lymphomas and toxicity. Common symptoms are non specific such as anorexia (appetite loss), weight loss, dehydration and lethargy. Signs of polydipsia (increased thirst) and polyuria (increased urination) may or may not be present. A definite diagnosis can only be made through urinalysis, blood tests and sometimes x-rays. Treatment includes rehydration, feed adjustments and the use of certain specific drugs if required. Unfortunately, the prognosis for renal failure feline stands as, “Very Poor”. Though it is incurable, it is considered to be manageable."

This condition is more common in older cats or those that ingest excess amounts of toxic material. Cats affected by renal failure develop inflammation in parts of the kidney and might show symptoms such as pyelonephritis (urinary tract infection), interstitial nephritis (kidney inflammation around the tubules) and glomerulonephritis (feline kidney blood vessel inflammation). As the condition develops over time and remains sub clinical (without visible symptoms), it is therefore termed as the “end stage” of a feline urinary health issue. 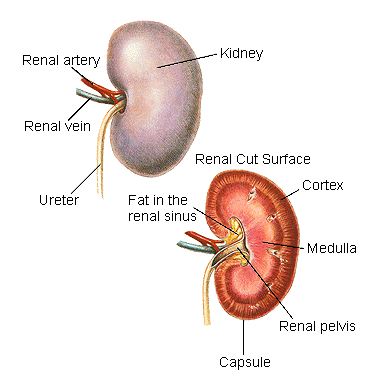 Picture Cat Kidney Anatomy
The pictures in this section are reprinted with permission by the copyright owner,  Hill's Pet Nutrition, from the Atlas of Veterinary Clinical Anatomy. These illustrations should not be downloaded, printed or copied except for personal, non-commercial use.

Along with other causes of cat renal failure, there are some factors which are significantly related with the occurrence of this condition. These may be excessive use of cat foods containing rich proteins and unnecessary booster doses of certain vaccines. These factors lead to the development of renal infections, stones and immune mediated inflammation, which can end in renal failure.

Picture of  Cat Kidneys That Are Enlarged

Feline renal failure in most cases remains obscured and symptoms are usually not exhibited during the early stages of the condition. Even if symptoms appear, they are non specific meaning they don't necessarily indicate a cat kidney problem; these symptoms include dehydration, anorexia (appetite loss), signs of anemia (low red blood cell count), lethargy and progressive weight loss.

As far as typical symptoms of cat urinary tract problems, i.e. polydipsia (increased thirst) and polyuria (increased urination) is concerned, these may or may not be exhibited. These symptoms are actually related with the non specific signs, i.e. dehydrated cats can never exhibit signs of polyuria, or anorexic cats do not tend to drink water. Thus, a better indicator of kidney disease is the severity of non specific signs; there will be fewer instances of certain specific signs.

Clinical signs should be closely noted when making a diagnosis. The history of feeding, poisoning, vaccinations and any existing renal problem is important in making a decision towards forming a definite diagnosis.

Confirmation of the diagnosis can only made through laboratory testing, i.e. urinalysis (testing the urine) and blood tests. These should be examined for the presence of excessive nitrogenous toxin content. Both these procedures can confirm feline renal failure. The status of the condition and prognosis is usually made on the basis of laboratory results and x-rays. Changes in the size and appearance of the kidney and possible distribution of toxicity to surrounding areas can be noted through the x-rays, allowing the possible outcome of the disease to be assessed.

Unfortunately, renal failure feline is an incurable condition. This is considered the “last stage” of a feline urinary tract problems, which can not be cured. The diagnosis for renal failure in cats usually indicates that the cat will not survive.

However, improvement can be achieved in the quality of life for the affected animal and some support can be provided with several different approaches. The initial approach follows rehydration of the affected animal. If the cat is not anorexic, this can be done by offering excessive fluids in smaller volumes. Fluid therapies can help in this regard, sometimes intravenous administration is not recommended. Researchers believe that subcutaneous administration of fluids (just below the outer layers of the skin) are more effective in cats with severe renal problems. Also, any other treatment approach should only be initiated when affected a cat is stable and rehydrated to nearly normal levels. Rehydrating an affected cat 2 time is usually not effective. Patients may get dehydrated several times, so fluids should be offered orally and frequent subcutaneous fluid administration should followed.

Feed adjustments are necessary for support and to improve the quality of life. Proteins should be restricted and amount of minerals should also be reduced. Only quality commercial cat kidney diets containing low levels of proteins (proteins that are provided should be higher quality) and minerals should be used. Home made cat renal diets should not be used.

Some natural remedies which help to improve energy levels and immunity naturally are preferred in cases of cat renal failure. Products to consider include Kidney Support and Energy Tonic . If the cats with incurable renal problems are managed carefully, they may survive for several months to years, otherwise, the prognosis for this condition remains, “very poor”.

Have advice about a cat kidney problem or renal diet, or want to ask a question about this topic? Share your story or Ask Your Question Here. One question will be answered by our editors each week.