Symptoms and Treatment of Cat Rabies

"Kitten or Cat rabies is a viral infection that can infect any mammal. It causes classic nervous system related signs, and once these symptoms are exhibited the disease becomes fatal. The Rabies virus has several strains/types, but there is no known strain that is specific to cats. Cats only transmit the virus as a host, but can still be severely affected. Brain cells of an affected cat need to be examined for confirmation of the disease. There is no treatment for feline rabies; cats exhibiting rabies signs should be euthanized and disposed of with care. Vaccination is the only way to prevent the virus.."

Cause and Transmission of Cat Rabies:

Rabies is caused by a type of virus called the lyssa virus, part of  the rhabdoviridae family. The virus is specific for carnivores and rats, but any mammal can become infected. Cats, being a mammal, can easily be infected or while acting as a host. There is no specific strain or type of rabies virus known for cats and no  “cat-to-cat” viral transmission has been noted. Cats usually get infected from other infected mammals and act as a carrier. 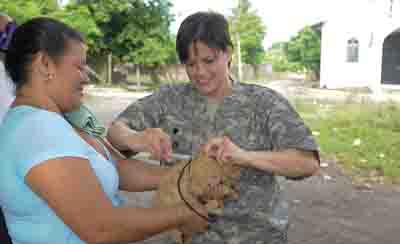 A Cat Rabies Vaccination as is the case with this kitten is the only way to protect a pet against the virus.
Source: 807th Medical Command (Deployment Support) from Salt Lake City (Fort Douglas), UT, United States of America


The cat rabies virus occurs in the saliva of the host/infected animal and is transmitted when an infected animal bites the feline. The virus exists for weeks to months in a bitten cat until the signs appear. Even though there is no specific strain/type of rabies for cats, in the United States reported cases of feline rabies have outnumbered those in dogs.


Once a cat is bitten by a rabid animal, the virus slowly travels along with the nerves and reaches the brain. The virus starts to replicate in the brain cells before any clinical signs appear.

Signs and symptoms are classically related to the  nervous system and appear in  phases. These clinical phases include the prodromal, excitative and the dumb phase.


Clinical signs are commonly used to identify cat rabies.  A history of biting or straying followed by signs of shyness, anxiety, fever and anorexia should be seriously considered by a veterinarian. Even then, it is possible that cat rabies is confused with several other conditions which show similar signs, such as  fever, anorexia and anxiety are very common signs to confirm any disease.

In the laboratory, brain cells of a cat that is suspected to have rabies can be cultured and the virus can be isolated for confirmation. There are some newer techniques, such as blood sampling and salivary examinations, but still these are not commonly used.


There is no treatment for cat rabies; a cat confirmed or even highly suspected for feline should be properly euthanized and the corpse disposed of with care. Only a qualified professional should perform this procedure. Some cats have been reported to survive after early diagnosis and critical care, but that is rare.

If a cat is suspected to have rabies, the pet should be carefully examined and according to the level of suspicion of exposure, such cat should also be immediately euthanized. If the owner is not willing to do so, these cats should be isolated with no animal/human contact for at least 6 months and should be vaccinated 1 month prior to release.


It is mandatory to vaccinate cats for rabies at an early age. Unfortunately, only 10 – 15% of domesticated cats are vaccinated against rabies. A cat should be vaccinated at the age of 3 – 4 months. The vaccination is repeated after a year.  Vaccines are available that are either administered on an annual or every three-year basis. We recommend three-year rabies vaccination since this approach is proven to be very effective.

The Merck Manual for Pet Health

Have A Question about Kitten Care or Have a Story That Will Help Others?

Do you have a question or story about taking care of kittens? Share it! We'll pick one question to answer each week.

If possible, please include a picture and include information such as breed, age, sex, medical history, changes in behavior, products used, indoor or outdoor etc.

Sometimes it is difficult to respond quickly. If you have an urgent question we suggest using this online cat veterinary answer service that is available 24 hours a day. You only pay for answers you like.

From Information on Cat Rabies to Cat Health Guide Home