"Heartworm feline is a mosquito borne disease caused by a parasitic worm called Dirofilaria Immitis. Mosquitoes carrying the causative parasite can transmit heartworm to any cat, outdoor or indoor, irrelevant of age, sex and breed. Symptoms of heartworm in cats are lethargy, intolerance, rapid breathing, vomiting, gagging, cough, anorexia (appetite loss) and weight loss. Signs resemble those associated with feline asthma. Symptoms are exhibited during the very last stage of the disease, usually in 6 – 8 months after Dirofilaria enters into blood circulation. It is necessary to monitor and screen cats with any of above mentioned symptoms for heartworm. Diagnosis usually requires various screening procedures, serological tests and radiography to confirm that a cat has heartworm. A clinical examination alone can never help in making a proper diagnosis. Unfortunately, no suitable treatment is available for feline heartworm. Only monitoring of the condition is recommended until the heartworm resolves itself on its own, which takes usually 2 – 3 years. Surgical and/or endoscopic elimination are the only possible ways to treat heartworm in severe cases. Some steroids and herbal preparations can help in maintaining a cat's strength while being monitored."

Causes and Transmission of Heartworm Feline:

Heartworm is a parasitic worm infestation caused by Dirofilaria Immitis. The heartworms can infest cats and other companion animals. The life cycle of this parasites shows that it requires an intermediate host, called a vector to complete its first larval stage before it can cause a pathological condition in the final host, a cat. 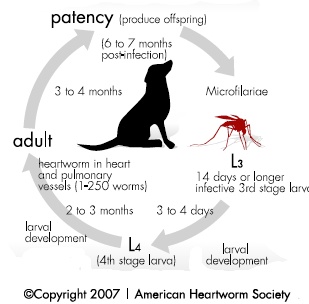 Seventy (70) different species of mosquitoes from all around the world have been identified as possible biological vectors for Dirofilaria. The organism completes its first larval stage in the mosquito and is then transmitted to healthy cats when bitten by a mosquito. It is estimated that outdoor cats are more susceptible to heartworm as compared to those that remains indoors. Cats may show typical signs within 2 months of infection along with fever. After signs appear, the infection remains potent for 6 – 8 months. Once the adult heartworm completely or partially congests parts of the heart and pulmonary artery, clinical signs are revealed. This stage is considered to be incurable. 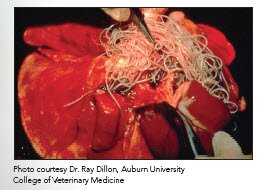 There are different stages of pathogenesis for heartworm feline. Cats carrying larvae of heartworms that are in the initial stages of development usually do not show any signs or symptoms for at least 2 months, as the causative parasite remains intact within subcutaneous tissues (just beneath the skin) while it completes its two larval stages. After completion of stage 2,it enters into circulation through the blood.

Initially, mild signs of lethargy, high fever, stress and intolerance to exercise are usually ignored by cat owners, which persist for at least one week. This is the best stage to screen and diagnose heartworm, since it can be treated effectively. Fever resolves itself, but signs of lethargy, intolerance and weight loss grow progressively, while the parasite remains potent and detection becomes almost impossible.

Clinically, heart worm feline can only be detected after 6 – 8 months of infection, when severe signs erupt and a cat experiences severe lethargy, cough, and intolerance to running and exercise. Stress along with vomiting, gagging and nasal discharge is noted. In terms of symptoms for heartworm feline, the disease can be classified as class I, II and III based on the severity and possible outcome of disease.

In cats, a conventional symptomatic approach to identify heartworm disease is relatively effective, as cats’ show symptoms rapidly and as they become psychologically stressed. Serological tests are the only preferred way for diagnosis of heartworm in all stages of the disease, as these are highly sensitive and specific. Detection of antigens and antibodies are the only reliable tests for confirmation and differentiation from other possible causes of the symptoms. In most infected cats, it is impossible to isolate parasites from the blood, as the immune system responds actively. Only traces of organisms, i.e. antigens and responsive antibodies can be possibly detected even in the potent phase of the disease.

These tests are used for filtering, screening and for confirmation too. Echocardiography is used to image heartworms in cats. Parallel lines on the right side of the heart and in the pulmonary artery confirm a heartworm infection. High worm burden usually appears as a mass, but lines on the periphery of the mass represent worms. Changes in the anatomy and the appearance of the heart are less common in cats, although it can help in making a diagnosis, but should not be considered important in terms of confirming the presence of heartworm.

Unfortunately, there is no suitable treatment for heartworm available. Use of drugs which kill heartworms is highly prohibited; even a single killed heartworm can cause irrecoverable congestion and blockage in the pulmonary artery, which can lead to immediate circulatory collapse, followed by shock and death with in minutes.

Feline heart worm treatment usually takes 2 – 3 years for complete elimination on their own, thus preference is for the monitoring of progress, support and nursing as the only way to treat heartworm disease in cats. Infected cats should be kept on restricted activity. The administration of corticosteroids such as prednisolone can help provide support and for mild control during monitoring. This drug is usually required to be administered every 24 – 48 hours, orally and continued till the complete elimination of worms is achieved, which happens after they complete their life cycle. This mode of treatment is long and costly, but studies have proven that 30 – 60% cases of heartworm feline have recovered completely. Steroids help to control symptoms such as vomiting and respiratory distress.

Some herbal tonics can help to maintain the strength of the heart and pumping capacity such as PetAlive Heart & Circulation Tonic . Thus, in addition to use of steroids and monitoring, herbal preparations are highly recommended.

In case, a high burden worm infestation is diagnosed, surgical retrieval should be preferred. Worms from the right atrium, right ventricle and from vena cava should be eliminated. Endoscopic basket can be used for elimination from deeper parts.

Four types of products are FDA approved to prevent heartworm in cats.  These are:

The Merck/Merial Manual for Pet Health


From Heartworm Feline to More Information on Cat Heartworm